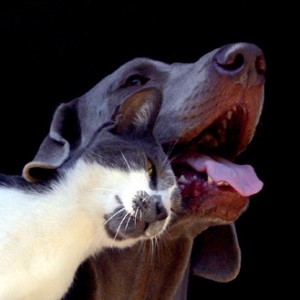 It seems that humanity divides into three parts: those who prefer dogs, those who prefer cats, and those who dislike them both equally. Now if you are of the third persuasion, don’t turn away now, I hope I can help you understand your fellows in the other two camps a little better.

I was brought up in a dog house. (No, not the dog house, although come to think of it, I spent a lot of time there.) My parents liked dogs, and so from a young age I lived with dogs. I enjoyed their company, thought them good fun, if sometimes a nuisance to look after, and animals of great character.

Then I left home and got married. To a cat person.

Now I am an animal lover generally, and so favourably disposed towards pets in general, but I had never really known any cats. Worse, I was a birder, and inclined to regard cats as the enemy of my feathered friends. I thought cats were relatively dull creatures, if generally friendly, but not characters like dogs. So someone up there decided to teach me a lesson, and sent me a cat with bags of character.

Kipper was a black and white standard moggie, and like the other women in my life, ruled the household. We opened the door when she wanted, fed when she demanded, and understood that things like chairs were really hers, and she just allowed us to use them (sometimes even at the same time as her). She had moods just like us, could be sociable, entertaining, grumpy, sleepy – just like any human, really.

I learned to read the mood of a cat, and discovered that they are very expressive with their body language if you become sensitive to it. You can tell how a cat is feeling once you understand the signs, and like a human companion, you deal with them as they are.

I discovered that if you let a cat onto your bed in the evening, then you and your wife wake up in the morning clinging to the edges of the mattress, whilst the cat is stretched out across the four feet or so in the middle. How does a creature weighing maybe 3% of our combined weight do that?
I have also since discovered that cats are all different. Some are more outgoing, some are shyer, some have bad trouble with their nerves, some are aggressive, some I am sure have a sense of fun. Some bawl you out if they don’t get treated right, others just sulk.

And now Kipper is just a memory, but we have Gatto, an enormous tom who simply adopted us and muscled his way in. He is quite different in character from Kipper, much more solemn and reserved, and also very gentle and patient – except when it comes to his food!

Anyway, I would now classify myself as being firmly in the cat camp. It’s not that dogs are bad, or that I don’t like them any more, just that I know that cats suit me better.

And I now know why they do, and why people are cat people or dog people. It’s to do with how you interact with them, and the principle is quite simple:

Dogs need to be told what to do and what not to do. In many respects that makes them good pets for a child, and certainly so for adults who want to have a child substitute (or addition) in the family.

Think about the kinds of person you know with a dog: there are the family types who love having kids around, who are always looking after another 6 kids as well as their own, who volunteer for kids’ parties, take on school trips, and generally feel most comfortable in the company of youngsters. There are the older couples whose children have left home and left a hole in their affections. And then there are insecure men, who want a dog to order around, preferably a large fierce one, so that they can feel big about controlling something that is subordinate to them like a child, and will obey them.

Cats on the other hand are like other adults: they can’t in general be told what to do, they have to be persuaded. You interact with a cat as an equal. A dog can be trained to obey a command such as “Come here!”, whereas a cat may learn that it is worth their while as a rule, if they’ve nothing better to do. If you try to force a decision on them, they will get the hump, and then it won’t be right until you apologise. Don’t believe me? You’ve never had a cat.

And so cat people are the kind of people who generally prefer the company of adults to children. Cats, like human adults, can be frivolous, serious, amusing, full of concentration or a bit vague, in need of peace and quiet or in need of company and a chat, often nosy, and yes, childish. Kipper always seemed to want a conversation when I was doing something – particularly when using the computer (she would insist on standing on the keyboard) or when doing paperwork (which is great for lying on), and it was very hard to refuse. She had the winning technique of purring like a small lawnmower when doing something she knew was a bit intrusive, because she also knew I would fall for it.

So why do some people prefer parrots, snakes, newts, rabbits or gerbils instead?

Sorry, my theory only goes as far as feline and canine society!

The dog vs. cat question