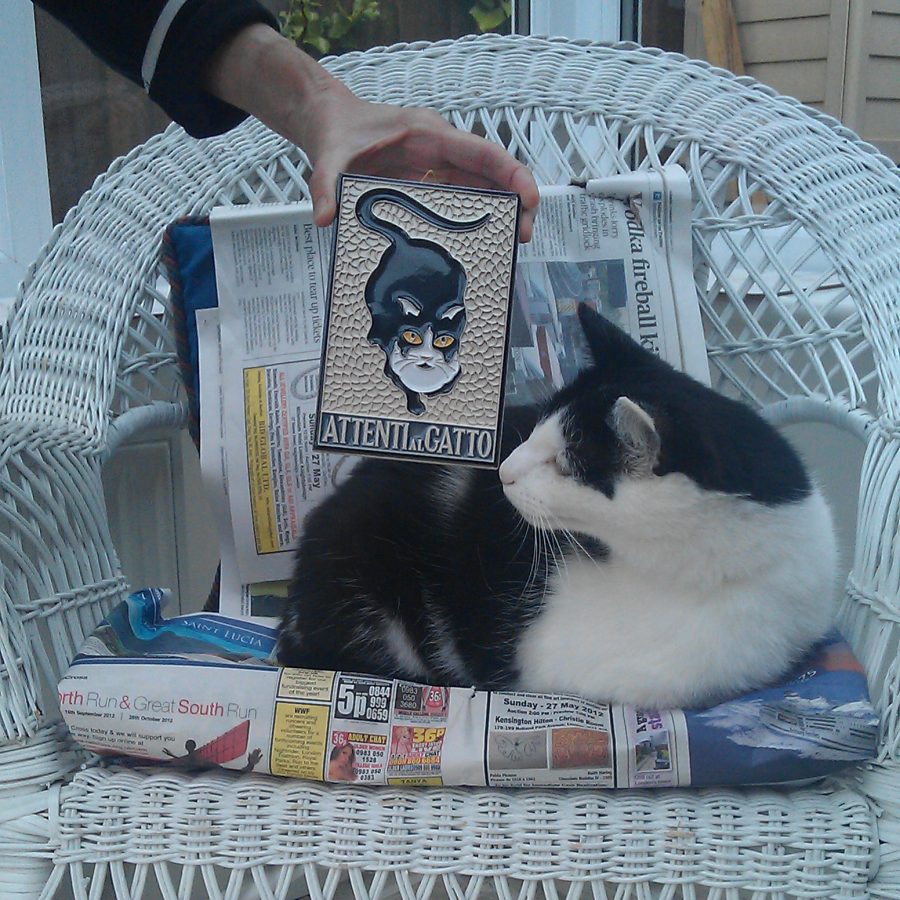 My cat Gatto is addicted to social media.

There’s a particular shrub at the end of the garden path that he pays lots of attention to – marking with his whiskers and of course sniffing, since all the other neighbourhood cats also use the same shrub. Naturally we now refer to this shrub as Facebush.

I am pleased to report that after detailed study, and with help from Gatto, I have managed to decode the feline messages left by Gatto and can report the latest to you here. I haven’t yet managed to decipher the replies by the other neighbourhood cats, but I think you get the gist…

My name is Gatto, at least that’s what my new parents call me. I’ve moved in here, just so you know this is not free territory any more. You may have seen me over the allotment, as I used to roam the area after my previous folks up and left and I found I hadn’t got a home any more.

I saw my new Dad working on his allotment, and when he offered to rub my head as I was passing, I thought he seems ok and seems to understand cats. Then I found he lived right beside the allotment and thought it might have possibilities.

Of course I had to interview them both over a few days. I hung around until I’d seen them both and had a bit of petting from them both. Breakthrough was when she produced some catfood – don’t know how come she had that, there weren’t any cats living there or I’d have smelt them. After that it was just a case of making them realise I lived there now.

It took a while, probably a couple of weeks. I’d meow outside the door until they opened it and gave me some food. At first they kept giving me those soft wet pouches, which I ate anyway (you get hungry when you live on your own), but then she gave me some biscuits, much more to my liking. They kept saying, mustn’t give him too much, they will be feeding him at home, and I kept trying to tell them I haven’t got a home, keep feeding me! I gather they kept asking around to see if anyone knew where I lived. Nobody was able to say it was in the derelict shed over the allotments! Eventually they invited me in for the night and I was on best behaviour – lots of purring and nuzzling, and it seemed to work as they let me have the run of the house from then on. I got taken to the vet – don’t you just hate that? – where they said I was already neutered but not chipped, so I am now. I don’t know what neutered means, but anyway I am so it must be good.

So everything is really good now, I just need to get them broken in really.

Anyway, send me a reply so I know who you all are here, and we’ll sort out that territory thing in due course.

Happy to make your acquaintance. So you are the tailless tortoiseshell next door! Sorry you lost your tail, that must have been traumatic. I wouldn’t like that, you express so much of yourself through your tail.

I hope we will get on ok, living so close. I won’t go into your garden if you stay out of mine. By the way that includes the patch out the back where you’ve been going to the toilet a lot. Not appreciated by me or my parents.

No doubt I’ll see you around.

So, Mad MacAdder, you think you own this territory? Just because you are a big ginger tom who’s been lording it over these parts, doesn’t mean you’ll always have it your own way. Sorry, but this is my garden now, get used to it. And before you start throwing your weight around – yes, there is a lot of it – I’m a very big tom myself and I won’t be pushed around. Hope you see sense, I’d prefer to come to an amicable arrangement. No doubt I’ll see you at some point and we can discuss this tom to tom.

Does anyone know who is that long haired black cat I’ve seen in the road? Seems always to be in a hurry, never stops to say anything just rushes off. With all that fur you can’t even see his legs moving! Dad says he’s like Dougall from the Magic Roundabout, but I never heard of him either. Anyway, let me know.

Thanks Faith, so he’s called Scuttle! How appropriate! Does he ever stop long enough to use Facebush? I guess not.

I didn’t realise you came round this way, have only ever seen you over the allotment! Mind you, I should have guessed, there’s some of that long black and white fur stuck on the hedge out here. It must be a nuisance trying to look after that, no wonder you’ve always got furball. If you can get out I’ll meet you over there this afternoon, I’ve got my eye on one of the patches that isn’t looked after, I think there’s some mice in there.

I’m sorry, I meant to come out, but how was I to know my folks were going out in the car for the afternoon? I don’t have one of your catflap thingies here, I rely on them to let me out.

I know, if they are here, they are very responsive. I only have to start mewing at the door and they are on the case in a trice. They are very good to me really, it’s just I was caught out, I don’t know their ways yet. I’ll get them sorted soon enough.

You say you caught a mouse and two voles? Really Smudge? Only I’ve never actually seen you catch anything at all. And before you say it’s because I make too much noise when I’m there, I’ll have you know I can catch plenty on my own. I had to when I was homeless after all.

More transcriptions of Gatto’s Facebush posts in due course, when I’ve had time to catch up with his news…

A cat on social media